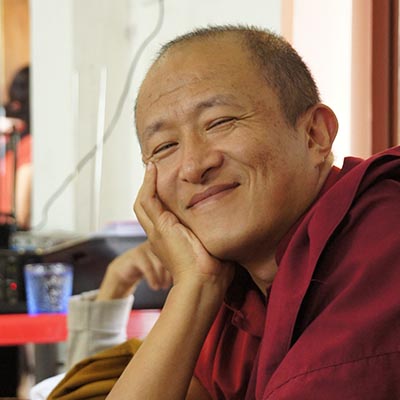 Dzongsar Jamyang Khyentse Rinpoche, is the inspiration behind Middle Way Education and the Middle Way School. He is the founder of Khyentse Foundation, a not for profit organization that supports all traditions of Buddhist study and practice. KF is the lead sponsor of the school through a special grant. Born in 1961 in Bhutan, Rinpoche was recognized as a tulku of Jamyang Khyentse Chökyi Lödro by H.H. Sakya Trizin, and received empowerments and teachings from many of the greatest masters of Tibetan Buddhism, including H.H. the 16th Karmapa; H.H. Dudjom Rinpoche and Lama Sonam Zangpo (his paternal and maternal grandfathers); Chatral Rinpoche; Nyoshul Khen Rinpoche, Khenpo Appey, and many others. His root guru was Dilgo Khyentse Rinpoche, who began training Rinpoche from the age of 7.

He also oversees two monasteries in Bhutan, one in India and one in Tibet, and has established dharma centers in Australia, Europe, North America, and Asia. He has written several books including What Makes You Not a Buddhist, Not For Happiness, and The Guru Drinks Bourbon?. On the side, he as directed award-winning feature films including The Cup. His work was selected for the 2019 Venice Biennale. Rinpoche continuously travels all over the world, practicing and teaching the dharma.