This article was originally published on Chronogram. It has been republished here with permission from the author.

A. recently caught on to what I think is one of the coolest, most helpful of the Buddhist teachings: The Six Realms of Existence, which we traverse as we spin around and around (and around and around) on the Wheel of Samsara. Samsara, which literally means whirlwind, refers to the endless cycle of birth and death, and the source of our perpetual discontent. From the subtle feeling that something is off, to the horrors of global genocide, we suffer because we believe we are separate, and we, thus, attach to that which we erroneously (impossibly) wish to attain. If it (world peace, a clean house) is not separate, how can we ever get it? Press Repeat.

It is only a fully realized Buddha who gets off the wheel for good, attaining the state of the “nonreturner.” And for the rest of us? We bring our awareness to these states of being as we experience, embody, resist, and crave them.

The wheel contains six distinct, though related realms—hell, animal, human, hungry ghost, jealous gods, gods—in our minds, psychologies, and, if you can go there, cosmically. Rebirth, then, refers to our thirst-driven propensity to keep transmigrating through the various realms, literally, as in our different lifetimes, and also within this lifetime. It is only a fully realized Buddha who gets off the wheel for good, attaining the state of the “nonreturner.” And for the rest of us? We bring our awareness to these states of being as we experience, embody, resist, and crave them.

Since A. recently drew her six-year old version of the Wheel, I just couldn’t resist sharing it and her commentary as we launch ourselves into Spring. Oh, the sweet smell of earth; Oh, the sound of peepers in the dark; Oh, desires…they are truly inexhaustible. 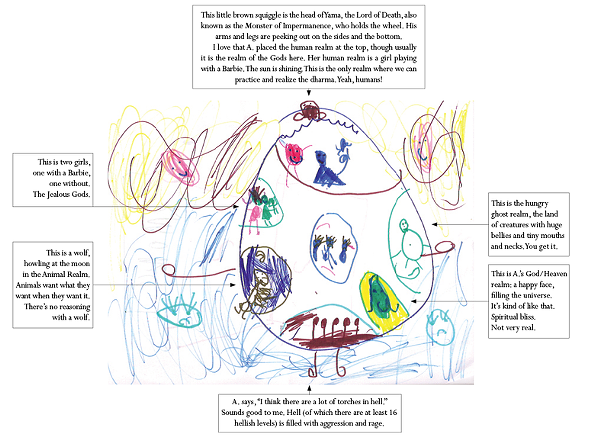 The Wheel of Samsara Goes Round and Round

The top half of A.’s wheel is happy, which indicates the upper regions of samsara.
This usually includes Humans, Gods, and Jealous Gods, but due to my personal affinity
with the Hungry Ghosts, I am grateful for the promotion.
The bottom is sad (and wearing false eyelashes?!), indicating the lower realms,
usually relegated to hell, animals, and hungry ghosts.
In the middle is the three poisons—greed, anger, and ignorance—shown in the form of the pig, the snake, and the rooster. This is the hub of our despair. Traditionally the three beasts are eating one another.
The yellow and blue is “the wind,” A. says, “turning the wheel.”

The 10 Positive and Negative Actions

A guided contemplation and discussion of the ten positive and negative actions according to the Buddha.

How to Understand the Mind

Kyabgön Phakchok Rinpoche, talks with Bodhi Kids founder Maya van der Meer about how to explain the mind to an 8-year-old child.

Principles of the Middle Way School

The guiding principles of Panyaden International School are represented by these 12 Wise Habits. Read them here or download a copy to put up as a friendly reminder.

Bethany Saltman is a mother, a Buddhist, and an award-winning writer whose work can be seen in magazines including the New Yorker, New York Magazine, and Parents, Town & Country.